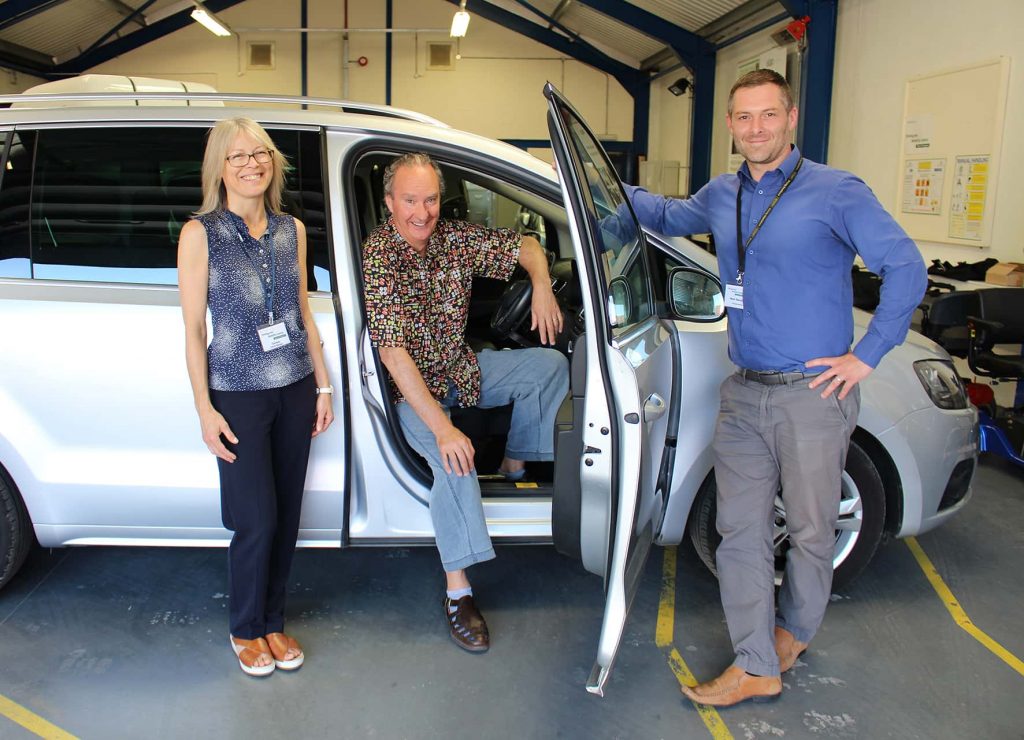 Richard Dutton, 65, from Bristol, recently attended the Driving and Mobility Centre (West of England), to assess fitness to drive, twelve years after a serious vehicle collision resulted in partial loss of vision.

The charity, Driving Mobility, is a network of sixteen independent organisations, many with satellite centres, covering England, Scotland, Wales and Northern Ireland which offer professional, high quality information, advice and driving assessment to people who need to gain or retain independence through mobility.

Driving assessments include checks of visual, cognitive, and physical abilities with all centres staffed by Occupational Therapists as well as Approved Driving Instructors. The Driving and Mobility Centre (West of England) provides passenger, driving and scooter assessments and enables people to stay independently mobile, in safety and comfort.

In 2006, Richard was involved in a head-on collision with a motorist travelling in the opposite direction, who was overtaking six cars simultaneously. The impact was so severe that Richard spent the following month in the John Radcliffe Hospital, Oxfordshire. Traumatic brain injury (TBI) caused by the force of the sudden head-on impact resulted in Homonymous hemianopia – a visual field loss on the same side of both eyes. It is often seen as a result of strokes and traumatic brain injuries due to the way vision is represented in the brain.

Richard underwent a standard eye test, the binocular Esterman visual field test, used by the DVLA to assess if people are fit to drive, and his right-hand side vision was graded as being lower than the acceptable benchmark.

Mr Dutton comments: “The day of the crash, I was on my way to work. A trained jazz musician and performer, I was teaching music at Magdalen College School in Oxford and had also taught prison inmates for 15 years. I simply could not escape the car coming towards me on the same side of the road. My injuries meant that I had to surrender my driving licence and as I was unable to transport music equipment in my car, unfortunately my professional career stopped at that point.”

In 2017, having relocated to Bristol, Richard decided to see if his driving could be assessed again. Accustomed by now to using public transport, he also felt that he had adapted to his altered vision and would like to see if he could regain his licence. The DVLA requested written support from medical professionals and his new GP contacted them. He also received support from a private neurologist in London, who was familiar with Richard’s eye condition and felt he was fulfilling DVLA criteria.

Richard comments: “The DVLA have now agreed to reconsider my case under Section 88 permission. They referred me for an initial assessment with the Driving and Mobility Centre (West of England), at the Vassall Centre in Bristol, who provide comprehensive assessments of ability to drive a vehicle safely. I had a meeting with an Approved Driving Instructor (ADI) and an Occupational Therapist, who then accompanied me out in a car.”

Richard continues: “This is the first time I had driven in twelve years and I admit to being a little rusty on the gears and clutch! Mark and Helen were both incredibly supportive however. Afterwards, we spoke about things that had gone well and they also highlighted some areas of concern. The centre has now sent a report to the DVLA and recommended that I take a short course with an accredited driving instructor. The services offered by the Driving Mobility centres are so beneficial and I really hope people are made aware of them in the early stages of rehabilitation. I shall be returning for a second assessment and I am hopeful that as I will be familiar with driving by that stage, a clear picture of my abilities will emerge.”

Article originally published on Driving Mobility, supported by Department for Transport
As a registered charity, Driving Mobility oversees a network of 16 independent organisations covering England, Scotland, Wales and Northern Ireland, which offer professional, high quality information, advice and assessment to people who need to gain or retain independence through mobility.

Top
We use cookies to ensure that we give you the best experience on our website. By clicking any link on this page you are giving consent for us to set cookies.OkRead more